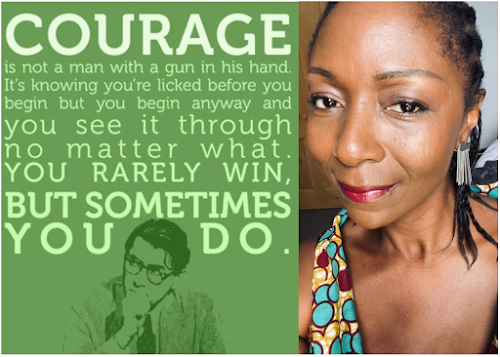 Gaslighting victims of racism into questioning their reality is often used as a strategy for disrupting progress in confronting and tackling this major challenge in our society.  In response to the question, how do you know it is racism? My response would be: How do you know it is not racism… have you ever experienced racism?  Being asked to prove racial discrimination is a bit like being asked to prove rape. But with rape, there may be physical scars and the ability to obtain forensic evidence to help prove the case, which may not always be the case with racism, particularly in the workspace when the burden of proof falls to the victim.

Forget this “playing the race card” nonsense. Racism can be something that victims feel, without wanting to willingly acknowledge the presence of its toxicity in their lives.   Black people know when they are being treated unfairly, after all this is not a new phenomenon, but rather the norm for many. Victims observe and mentally record how other people (lets be specific…white counterparts) are treated in relation to themselves.  Victims understand the realities and nuances around white privilege.  Victims often record and mentally store such information, rather than documenting. Victims avoid the uncomfortable journey of reflection to analyse this information, because they know it will confirm discrimination was actually felt, rather than imagine, as Gaslighters aim to imply.  Our mental defence mechanisms can block out bad experiences, working overtime to help us forget, acting like a powerful sedative to protect us from emotional and mental strain. Going back into our memories of racism can be a corrosive experience, but sometimes this is necessary to counter Gaslighters.

There are some basic principles to help us determine and navigate exposure to racism. For example, I was raised to treat other people with dignity and respect.    This means not judging other people unfairly simply because of the colour of their skin. How could I characterise myself as a civilised human being, if I judged white people lesser than; not worthy of; not belonging to; hostile and aggressive, simply because of their paler complexion.

A black colleague described the first conscious recognition of racism as “a feeling of hmmm…” I imagined this would be the point when the victim’s racism radar would leap into action. There is normally a small window to react and call out such aberrant behaviour. But often, many black people miss this critical window of opportunity, because they feel the need to go away and question whether or not the situation was indeed racism or something else.  As black people we often forget that detecting racism is in our DNA and we should set aside feelings of self-doubt and trust our instincts. Racism has evolved over centuries, into words and subtle gestures, not just violent overt attacks.  So has our ability to detect such behaviours given our high level of emotional intelligence.

Regardless of our attention to being cooperative, we somehow still attract these negative descriptors such as “hostile” and “aggressive”.   In my case such labels would be attached to characterise me as the archetypal angry black woman.   I wonder whether no other words were handed down to use against black people, apart from those overused words and phrases, which in my mind confirms that racism is a product of white mediocrity.  In my experience, racists shed their disguise of pretending to be decent and civilised human being when their views and opinions are challenged. As black people, we are simply expected to accept and move on. Somehow, my mind often conjures up the sweaty court room in the film To Kill a Mocking Bird, which was set in Maycomb, Alabama, during the Great Depression and Jim Crow era.   In observing the trial of Tom Robinson, a black man accused of beating and raping a white woman,  Atticus Finch (Tom’s lawyer) explained to his son Jem “the one place where a man ought to get a square deal is in a courtroom, be he any colour of the rainbow, but people have a way of carrying their resentments right into a jury box.”  This translates to our society and the workplace, where despite laws to protect against racism, it is still pervasive and the burden of proof is placed on the victim, who of course lacks white privilege, the benefit of the doubt and all other perks associated with whiteness.

Organisations hold evidence of racism and could be more active in analysing and disaggregating data for use in the defence and protection of black employees. It is important to do more robust analysis which involves comparing the behaviours and treatment of different people in different situations.  Collecting qualitative evidence such as case studies to better understand the complexities around racism and effectively drive change would help increase trust and confidence of black employees in their employers.  There is also more that victims can do to actively collect data, by recording feelings and experiences and saving emails and other relevant correspondence to effectively tackle abusers…and Gaslighters.  Learn to clarify and confront situations in writing and make more use of legal channels available. For example, follow up with your racist by writing to clarify conversations….eg. what you said and/or what you did on x date made me feel….[describe the impact of such negative behaviours and say what you expected and why.  The ability to confront with documentary evidence is extremely important because racists as bullies do not like to be challenged or held accountable.

Returning to the above-mentioned fiction in Maycomb, Alabama, some commentators saw the unfair conviction of Tom Robinson as sending an important message to the black community about the negative consequences of seeking equality with white people. Tom, subjected to Jim Crow Laws, was never expected to gain justice.  The book was a clear depiction of the realities of that time.  But this cannot and must not be our reality now. My zero-tolerance stance on racism expects racial justice to remain a high priority, to ensure victims gain the proper justice they deserve.  To achieve this, we need more people like Atticus who recognise above all the need for courage and tenacity.