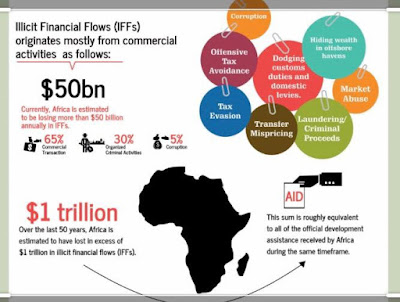 A more effective and sustained response to tackling Illicit Financial Flows (IFF) is required to achieve better development outcomes. The report “Illicit Financial Flows, the economy of illicit trade in West Africa” published by the Organisation for Economic Co-Operation and Development (OECD) in 2018, stated that Africa loses an average of US$50 billion every year through IFF.  Volumes of illicit flows are staggeringly high; methods increasingly sophisticated and the impact shockingly harmful to the world’s poor and to global integrity.

This massive theft of public funds means that the desperate plight of Africa’s poorest can never improve. Therefore, IFF pose a major threat to the achievement of the Sustainable Development Goals.  The fact that Nigeria has the highest population of poor people in the world illustrates that sustainable development is doomed without serious political commitment and action to stop this haemorrhaging of valuable resources. Prevention is far better than cure. Once money takes flight it is extremely difficult to recover and return it to countries of origin. In some cases, it takes decades of investigation and legal processing, which obviously incurs costs.  This significantly diminishes the value of the gross amount stolen and the impact it could have made, if used for national development in the first instance, can never be realised.

IFF is about greed and the ability of individuals operating with financial impunity to steal with reckless abandonment, because they are protected through patronage networks and political connections.  Like most things, the significant increase in IFF is driven by supply and demand factors. Many ordinary people benefit from the laundering of stolen money (including through tax evasion), even unknowingly. There is a need for greater public awareness about IFF in both developed and developing countries, using more accessible language, rather than dense definitions.   People should know if they are facilitating the laundering of stolen money through commercial or business dealings.  We are all touched in some way by IFF, so it is important to consider whether businesses we deal with are clean and ethical.  I am certainly curious about the performance of my bank in tracking and reporting suspicious financial transactions, as required by regulators.   I was interrogated by my bank when trying to transfer a very modest sum across borders a few years ago, so how can billions move so freely?  A cleaner business environment requires a similar approach taken to preventing other harmful practices such as blood diamonds and unethical trade, where some progress has been made due to a higher level of public awareness, engagement and demand for change through social movements.

Prevention and enforcement measures (including legislation) for tackling IFF are lagging far behind the challenge. I blog about the things I really care about and what bothers me with IFF is that it allows certain people access to the best healthcare internationally, whilst others are hindered or die from easily preventable and/or curable diseases through lack of access to basic health care. Some kids go to the best schools abroad and are destined for lives financed by stolen money, whilst other kids struggle to gain functional literacy and lack opportunities to realise their full potential in life. Some can buy the best properties abroad and drive luxury cars without caring that they are committing millions of follow citizens to extreme poverty. How people spend their money is often the best indicator of how they came by it in the first place. People who work hard for their money, including the genuinely rich, spend decently. Therefore, it is not so difficult to detect those living on stolen money through their illicit spending patterns and behaviours.