CONSTITUENCY PROJECT TRACKING GROUP – AN OPPORTUNITY TO HOLD LEGISLATORS TO ACCOUNT - BUT CITIZENS MUST ACT. 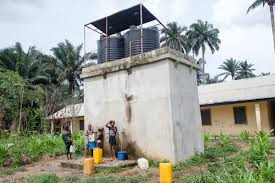 The Constituency Project Tracking Group, initiated by the Independent Corrupt Practices and Other Related Offences Commission (ICPC), has the potential to transform the relationship between elected Nigerian Legislators and their constituents, by increasing accountability at the community level. But this can only happen if ordinary Nigerians are given the knowledge and means to mobilise and are actually willing to act.
Constituency Projects started in 1999, under President Olusegun Obasanjo’s Government. The initial thinking seemed noble, in terms of delivering projects which touched the lives of citizens.   But few Nigerians appear to have benefited and even fewer really understand the decision-making and execution processes involved.  Significant criticism has been levied towards Constituency Projects in the past with no effective response or investigation into allegations of corruption.  In fact, this way of operating has become normalised, with corrupt elite beneficiaries acting with impunity.

In December 2016, legislators were criticised for pursuing a Bill which would allocate 20% (N1.4 trillion) of the national budget for Constituency Projects, which its members would execute exclusive of the executive arm of government. Fortunately, this proposal was condemned by civil society, academia and businessmen and described as an attempt to legitimise corruption.  Legislators were scolded for being more interested in Constituency Projects, than their primary oversight functions. One prominent civil society representative stated ….lawmakers cannot continue to act as if Nigerians who voted them into office don’t matter…”  Perhaps CPTG’s recent findings reveal that this is indeed the shocking reality.
Constituency Projects account for vast sums of public money and appear to have little to no monitoring and oversight, thus ripe for corruption Annually, N100 billion (£225 million) is divided between geo-political zones (N10 billion each) and Senate and House of Representatives (N40 billion).  This appears to be a lucrative side-hustle for already highly paid legislators (receiving salaries almost 10,000 times more than the national minimum wage) but who also claim to be in the best position to know the needs of their constituents. People are often confused into thinking that such projects are financed personally by legislators, rather than from public funds.

CPTG, a body comprising both government and civil society/media, triggered recent media reports about the high level of theft and misuse of money meant to provide basic services and empower the very poorest Nigerians. The first phase of CPTG ‘s work started in June 2019 and ICPC has already reported N1.1 billion (£2.4 million) saved through the recovery of assets, money, reducing padded budgets and ordering contractors to complete abandoned projects.  CPTG’s field reports exposed the extent to which legislators pursue their own vested interests, whilst denying poor Nigerians basic services and economic opportunities. Items such as medical equipment; grinders; tractors and rickshaws were hidden away, rather than distributed.    Public shaming seems necessary and Legislators have been televised handing over items to constituency members under threat of prosecution.

CPTG has made an excellent start towards developing an inclusive process which encourages a broader range of civil society and citizens to mobilise in support of this initiative. It is important that this effort is sustained to the extent where citizens can begin to play a more active role in holding legislators to account through various interactions, including at the ballot box.