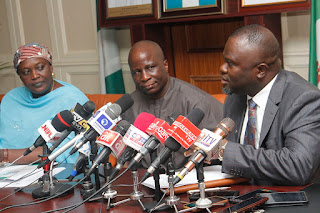 Abuja, Nigeria. May 22, 2019… Leading Asset Recovery Campaign Organisation, the Africa Network for Environment and Economic Justice, ANEEJ has urged President Muhammadu Buhari to sign the Proceeds of Crime Bill and the Mutual Legal Assistance Bill into Law.
In a statement issued yesterday, shortly after the National Assembly transmitted both  Bills to the President for his assent, ANEEJ Executive Director, Rev David Ugolor said when signed by the President, POCA and MLA would strengthen anti-corruption architecture in Nigeria and take the war against corruption to the doorsteps to treasury looters.
“We urge the President to assent to both Bills to strengthen the asset recovery architecture in Nigeria and also institutionalize the enabling frameworks for the effective implementation of the London anti-corruption and the Global Forum for Asset Recovery (GFAR) commitments which the President signed unto in 2016.
“We commend the National Assembly for transmitting both Bills after painstaking negotiations. While we note that the POCA cannot be perfect as passed by both chambers of the National Assembly, if assented to by the President, it will help send a strong message to other jurisdictions withholding our stolen funds,” Rev. Ugolor said.
“This is a significant milestone for all anti-corruption activists in Nigeria and a quantum leap in the implementation of the National Anti-Corruption Strategy of the Federal Government. We must ensure that looters of the nation’s treasury are not allowed to keep proceeds of their criminality. When assented by the President, POCA will make our campaign for the recovery and management of looted assets a lot more easier,” adds the Executive Director of CHRICED and North West Partner coordinating Transparency and Accountability in Recovery and Management of Returned Assets (MANTRA) project, Alhaji Zikirulahi Ibrahim.
The Executive Director of CIRDDOG, Enugu and South East Partner of ANEEJ Mantra project, Engr Raph Ndigwe  on his part said  “ the transmission of both bills to the President for assent signals a significant milestone in the war against corruption in Nigeria. Senator Utazi has written his name in gold in the struggle to rid Nigeria of corruption by this development.”
“We are happy with this development and we call on the President to assent to both Bills and use it as a template to firm up assets recovery institutional framework in the country,” said Executive Director of NISD, Ado-Ekiti and Mantra coordinating partner for South-West Nigeria, Abiodun Oyeleye.
“It will surely give the needed teeth to the ACAs to bite treasury looters. Unexplained wealth can be seized and the onus placed on the owner to showcase why the government will not seize such suspicious assets with POCA,” Oyeleye stated.
The MANTRA team commended the doggedness of the Chairman, Senate Committee on Anti-Corruption & Financial Crimes Committee, Senator Chukwuka Utazi for his untiring efforts that eventually led to the passage of the POCA and MLA Bills into law and their transmission to the President for assent yesterday.
“We also want to place on record the excellent support offered by the Senate Committee Chairman on Judiciary, Human Rights and Legal Matters, Senator David Umaru leading to the passage of this all important Bill. We equally appreciate the leading role of the Honourable Attorney-General and Minister of Justice, Abubakar Malami (SAN) and his team in the Federal Ministry of Justice as well as Civil Society Organisations for their relentless efforts towards  the passage of the Bills over the years which has led to their final transmission to President Buhari for his assent,” David Ugolor stated.
Development
Reactions: